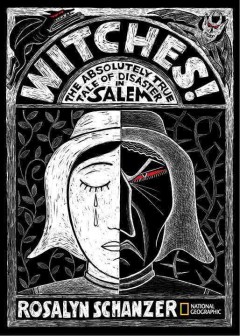 What if with one statement or random act, a person could be accused of being a witch and sentenced to death? This was the reality for many people living in Salem, Massachusetts, in the late 17th and early 18th centuries. During this time, there was an epidemic of witch accusations, resulting in many people being put to death. In Rosalyn Schanzer’s book Witches! The Absolutely True Tale of Disaster in Salem, the history of the Salem Witch Trials is laid out, from those accusing others of working with the devil, to the great lengths some would go to prove that someone was a witch. It seemed that if people were not accusing someone of being a witch, they were being accused themselves. The accusations were false, but the terror was all too real.

Rosalyn Schanzer creates a strong, linear narrative, starting with the hysteria and ending with the lasting effects of those who witnessed the terror of the trials. Using simple language to portray the crazy and horrible circumstances surrounding the accused and the accusers, Schanzer creates a work that explains what actually happened in Salem. Adding to her intriguing narrative are black, white, and red pictures that showcase the disturbing horror and terror that occurred in Salem at this time and bring to life the written words. Using primary sources from the actual trials, Schanzer depicts a terrifying time in history with ease and understanding, creating a book that will allow those who read it to be well-versed in the topic of witches.