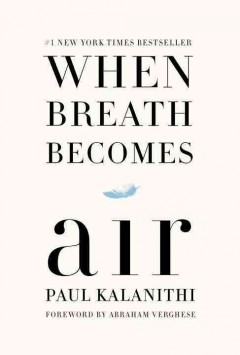 When Breath Becomes Air is a memorable, poignant, heartbreaking memoir of life and death. Dr. Paul Kalanithi was a 36-year-old neurosurgeon getting close to finishing his residency, when he was diagnosed with stage IV lung cancer. After his diagnosis, he has to confront his mortality much faster than he planned to. He had his whole life as a surgeon planned out, and then suddenly that had to change.
This memoir is written in two parts, the first a fascinating look into the life of becoming one of the top neurosurgeon residents in the county, the second a sad tale of a young life taken too soon. While the two parts tell very different stories, the style and emotions of Dr. Kalanithi’s writing stays the same, which makes sense because before he became a doctor, he got a Master’s in English Literature from Stanford. He always wanted to write, but never had the opportunity to use his amazing talents until after his diagnosis.

Dr. Kalanithi died in March 2015, before the memoir was finished. His wife Lucy finished the book, including the ending, which made the book even more heartbreaking in my opinion. This book put me through so many emotions; I smiled, I cringed, I looked on in amazement, and I cried, a lot. This memoir was devastating, but also beautiful and I feel privileged to have gotten to just scratch the surface of learning about this amazing, talented man who was taken too soon, because he had a lot to teach this world.