An old photograph prompts Allison Drake Littenberg to return to Chicago to mend fences with family members and friends, particularly Jack Callahan, the handsome cop she left back in 1969. Now, 30 years later, Jack is bitter from bad decisions and a nasty divorce. Even so, Allie prays that God will use her own broken past to touch his life – and the life of a dying, abused, and disheartened woman who, Allie realizes, is the key to unlocking answers to decades of questions. (FIC BOESHAAR)

New Poetry Out of Wisconsin / Ed. by August Derleth

Compilation of Wisconsin poets put together and edited by August Derleth: Bertolino, Gibson, Pollack, Swoboda, Vukelich and many others. (811.08 NEW) 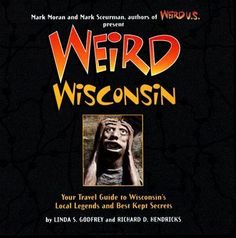 There’s a lot more to the Badger State than badgers; it’s also filled to the brim with weirdness. Visit Burlington’s Spinning Top Museum and recoil at the worm shower of Palmyra. Take a look at Highway 13’s Reptile Man, see the World’s Largest Six Pack, then get spooked over the haunted bridges of Stevens Point. From Madison’s Loony Lawyer to the Wily Wizard of Waukesha, this indispensible guide takes you on a journey you’ll never forget. (917.75 GOD)

The Book of Ruth / Jane Hamilton

Having come within an inch of her life, Ruth Dahl is determined to take a good look at it — to figure out whether, in fact, she’s to blame for the mess. Pegged the loser in a small-town family that doesn’t have much going for it in the first place, Ruth grows up in the shadow of her brilliant brother, trying to hold her own in a world of poverty and hard edges. (FIC HAMILTON)

While taking a break from the investigation of the murder of a PR specialist at the hospital, Doc and Lew find themselves in a life-and-death situation on the river, leading to a macabre discovery that just may break the case. (FIC HOUSTON)

How High the Moon / Sandra Kring

After her mother Catty runs off to Hollywood in search of fame, ten-year-old Isabella “Teaspoon” Marlene is left in the care of her mother’s boyfriend Teddy and has a hard time settling in to her 1955 Wisconsin small town until she becomes a part of the “Sunshine Sisters,” a mentoring program for young girls. (FIC KRING)

Badger Boneyards: The Eternal Rest of the Story / Dennis McCann

The bodies are buried, but the stories are not. From the ornate tombs of Milwaukee beer barons to displaced Chippewa graves and miniscule family plots, Badger Boneyards: The Eternal Rest of the Story unearths the stories of Wisconsin. (929.5 MCC)

Population: 485: Meeting Your Neighbors One Siren at a Time / Michael Perry

An oddball memoir of a small-town prodigal son turned volunteer with the local fire department who returns to his hometown after a decade of exile chronicles life in a village of 485 people in rural Wisconsin. (977.5 PER)

This anthology is a thorough introduction to classic literature for those who have not yet experienced these literary masterworks. For those who have known and loved these works in the past, this is an invitation to reunite with old friends in a fresh new format. (978 TUR)