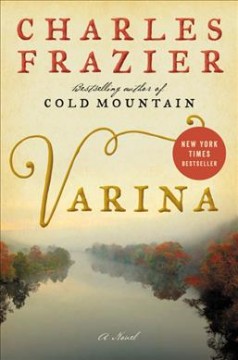 Charles Frazier’s debut novel, Cold Mountain, was a bestseller, National Book Award winner, and the basis for an Oscar-winning film. People who like Cold Mountain really like it, and people who don’t really don’t. It’s a meditative book, full of long descriptions and discourses on nature and meaning. I understand that is just not everyone’s cup of tea.

But I beg you to put aside your previous impressions of Frazier’s work when you pick up his third novel, Varina. The title character is Varina Howell Davis, wife of Jefferson Davis and the only First Lady of the Confederate States of America. Although Frazier is revisiting the setting of Cold Mountain–the post-war Confederacy–this novel is very unlike Cold Mountain.

Varina is more of a straightforward story, about a woman who tried to make the best of a life she never anticipated. She is a surprisingly sympathetic character, even to a reader as proudly Yankee as I am. I think this is probably because Frazier chooses not to delve too deeply into Varina’s opinions on slavery. The reader gets the impression that she was vaguely opposed to the Peculiar Institution, but Frazier does not dwell on the issue. While I wish the author had tackled slavery head-on, I understand that it would have made a very different novel. Instead, he chooses to focus on Varina’s inner life, her struggles with a difficult marriage, and her griefs and joys as a mother. (Can someone please give poor Mary Todd Lincoln a similar sympathetic treatment?) The narrative bounces around quite a bit in time and place, but Varina’s voice is strong enough to keep everything tied together.