Home » Reviews » Us Against You by Fredrik Backman 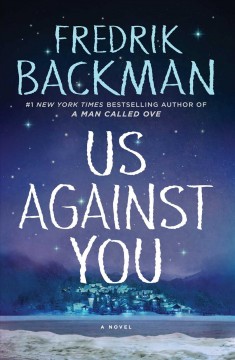 I am always a fan of Fredrik Backman’s work, but I must say that Us Against You is one of his weaker novels. It is the sequel to Beartown–the best novel I read this year–and it simply did not live up to its predecessor. But a final novel in the series is planned, and I hope the Beartown books return to strength with the third.

The problem with Us Against You is that it has neither a beginning nor an end. The plot begins right where Beartown left off. It is summer, and the result of Beartown Ice Hockey’s loss in the championship game is that the club’s funding is pulled. General Manager Peter Andersson, a wily politician named Richard Theo, and a surprising new coach join forces to salvage the club and field a team.

The action staggers forward unevenly, as the narrator skips from character to character every few paragraphs. Instead of a polished narrative, it feels more like a series of loosely related jottings on a storyboard. I think a little more editing work would have made Us Against You a stronger book. When it finally lurches to a climax, nothing is resolved, and the end of the book is an unabashed cliffhanger.

Us Against You is still a good book, because it carries on the stories of characters we came to know and love in Beartown. And I will certainly read the third book in the series when it comes out (a 2020 publication date is likely), in the hope that these characters will get the happy endings they deserve. But it is not the literary achievement that some of Backman’s other books have been. Even the biggest stars have bad games.