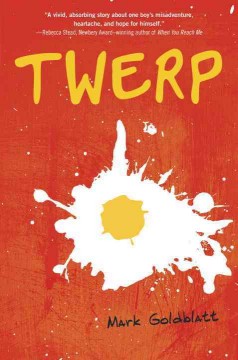 Julian Twerski, nicknamed Twerp, is a good kid. A smart kid. A kid who knows better than to go along with a prank like that. At the time he was just being one of the guys, following along with them in whatever Lonnie thought they should do. But that’s all water over the dam now. After serving his suspension, he’s got to spend the rest of the school year keeping a journal for his English teacher, Mr. Selkirk, not an awful penance since it’ll get him out of doing the Shakespeare assignment. The thing is, Julian doesn’t realize how much he has to say, and how much what he is writing is changing him.

Julian’s tale is not unlike the Shakespearian tales he is avoiding – a tale full of imagined love, betrayal, self-realization, and growth. The time and place of this middle grade novel is Queens, New York of the 60’s, though the story is timeless. We all know this story, and Mark Goldblatt has written his tale with depth, humor, and a passion for this age and time only someone who has experienced it can have. A worthy read. And, Julian? He read Julius Caesar anyway.