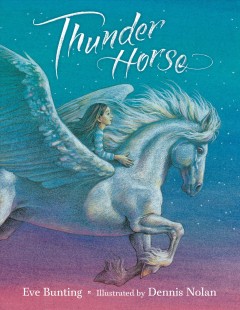 When I was a child, I wanted a horse. Now, at our house we had a cat (Phoebe), and a dog (Skippy), and several anoles (they’re small lizards, and, as far as I can remember, had no names.) But no horse. So, when this book came in, the little girl still in me wanted to read it. It is the latest in Eve Bunting’s list of more than 200 titles, and though in her 90’s Ms. Bunting has not lost her touch. If anything, her “touch” is better than ever. It is the story of a little girl whose Aunt Aldora gave her a tiny white horse which she said she’d found on a hidden Greek island. The horse was toy-sized, but as time passes becomes larger and larger, soon growing wings. At school she finds out about a winged horse from mythology named Pegasus, and thus names her horse. This is a gentle tale, beautifully told and lovingly illustrated, and one I suspect will become a new Bunting favorite.