Home » Reviews » The Women in the Castle by Jessica Shattuck 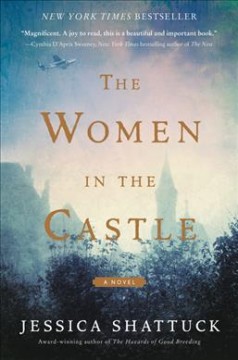 World War II provides some of the richest historical fodder for novelists. Everyone has at least a baseline understanding of the events, there is a clear-cut Good Guys/Bad Guys dichotomy, and the nature of the “total war” means there is plenty of room for civilian characters. An author can tell almost any story within the framework of World War II. The trouble with all the WWII stories is that, after one has read a few dozen, they all start to run together. I have trouble separating my memories of Number the Stars from The Hiding Place, The Nightingale from Code Name Verity.

The Women in the Castle is going to stand out in my memory, at least in some ways. (Although, mea culpa, I am already confusing parts with The Book Thief.) The main characters are three German women, the widows of men who plotted to overthrow Hitler. This was notable for me, because most protagonists in English-language WWII novels are Allies or victims of the Nazi regime. These women–Marianne, Benita, and Ania–are victims, certainly, but they also survive because of their association with the old German aristocracy. A female, German viewpoint is a fresh take, and all three women are compelling characters. I actually found Ania, the woman with a dark secret, to be the most interesting and relatable, though she didn’t get as much “screen time” as the other two.

The second notable point is the setting. Almost all the action of the novel takes place after the assassination plot has been foiled, the husbands executed, and the war lost. World War II novels usually end at or around the war’s end, perhaps with a “Where Are They Now?” epilogue set in the 1990s. But The Women in the Castle really doesn’t get going until 1945, and much of it takes place in the later 1940s and 1950s. The work of reconstructing lives after the guns have stopped is less dramatic than bombings and forced marches, but it brings up a different set of problems and moral dilemmas. Many novels have explored the rights and wrongs of World War II, but not so many have dealt meaningfully with the aftermath, especially for German civilians.

I can’t say that I enjoyed The Women in the Castle, because there was little joy to be had from such a grim novel. But I think it has an important place in the canon of World War II novels–though perhaps only as a placeholder for greater novels to come–because it illuminates parts of the story that are usually left in the dark.