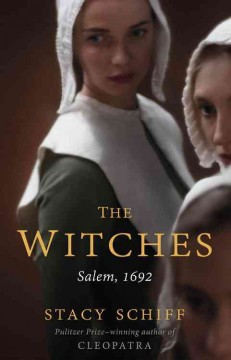 Because I enjoyed Stacy Schiff’s Pulitzer Prize-winning biography of Cleopatra, I was excited to get my hands on The Witches: Salem, 1692. I read Cleopatra several years ago, but as I recall I found it particularly evocative of the time and place (first-century BC Egypt), and delightfully free of the judgments so many historians have attached to the famous queen. In Schiff’s hands, Cleopatra was neither a sex goddess nor a feminist Wonder Woman, but a woman of her time who made real choices based upon considerations we all would recognize–pride, duty, and love.

Schiff treats the Salem Witch Trials material in the same expository, largely non-judgmental manner. I found the book engrossing–the blow-by-blow narration of the accusations, trials, and executions makes for a page-turning read. I also appreciated Schiff’s deep research into the context of the trials. But I found myself ultimately a bit unsatisfied.

The problem is that the author never takes a stand: Schiff never firmly advocates for any particular cause or causes of the Salem Witch Trials. She gives a nod to several of the theories historians have put forth to explain the witchcraft furor of 1692–and from urban/rural economics to religious divisions to tainted rye, there are a lot of theories out there. And I found that a bit of a cop-out. Schiff was right not to impose an overarching theory on the life of Cleopatra, because a person’s life is not a narrative arc and does not always have a unifying theme. A single, discrete historical event, however, has a cause or causes, and it is the charge of the historian to tease out the threads of cause and effect. By declining to do so, Schiff ends up delivering what amounts to a fabulous book report.