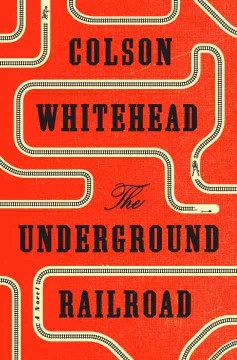 In order to keep my Cultural Literacy card current, I try to read the Pulitzer Prize and National Book Award winners each year. Since The Underground Railroad won both these honors, I was excited to check two boxes off my reading list. But I had already heard buzz about the book, and I wasn’t sure I would like it. The result of these opposite impulses was that I checked the book out a couple months ago, then kept reading other things while it sat on my to-read shelf. After three renewals, the library was demanding that I return their property or face the wrath of Mr. Bookman, so I started reading.

And then I couldn’t stop. Colson Whitehead went to the tired old well of “slavery times” and came back with his bucket overflowing. The Underground Railroad is a tour de force of strong, leap-off-the-page narrative, coupled with a fresh and arresting historical commentary. This book is going to be read and analyzed in American Literature classes for decades to come, right alongside The Adventures of Huckleberry Finn.

I can’t quite identify what it is about Whitehead’s writing that makes it so good. It isn’t necessarily terse, but no word is wasted. Every single syllable is working toward the goal. It reminds me of Picasso’s paintings–a relatively few strokes, perfectly executed, can convey far more than ten thousand dabs from the brush of an amateur. In fact, now that I’ve introduced the metaphor, I might say that The Underground Railroad reminds me of Guernica. Technically simple, yet masterful and shockingly powerful.

It’s easy to say why the book is so powerful. Whitehead takes a story we all know from third-grade U.S. history–the harrowing tale of an escape from slavery–and makes it anew. The protagonist, Cora, is beautifully drawn, and the plot walks a narrow path between the too gentle and the too graphic. But then the author uses a brilliant dash of magical realism (magical historicism?) to make the point that all other treatments of the topic have muddled. Each state, in the world of The Underground Railroad, has a different attitude toward the Railroad’s escapees. In South Carolina, Cora’s first stop, they are treated kindly by the whites but “encouraged” into segregated housing and selectively sterilized. In North Carolina, they are simply lynched, so the state need not decide what to do with them. At each stop, Cora encounters another, different attempt by the white population to deal with the problem of the free African American. This commentary on American race relations–past and present–is the boldest I have read in a novel in many years. It is the stuff many a dissertation will be made of, and rightly so.

Get a copy of The Underground Railroad and read it now. Then save it on your bookshelf for a few decades, so you can tell your granddaughter that you read her homework way back in 2017.