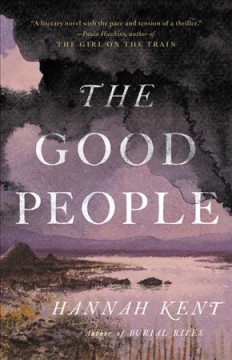 Hannah Kent’s debut novel, Burial Rites, was one of my favorite books of 2013. The young Australian author told a moving story about a woman quietly awaiting her execution on a remote Icelandic farm, while conjuring the chill of a northern winter in a way that made my Wisconsin bones shiver in recognition. I was anxious to pick up her sophomore attempt, The Good People.

The setting is again a remote, unfamiliar historical time and place: Ireland, 1826. The story begins with the sudden death of Martin Leahy. His widow, Nora, is left to care for their farm and their handicapped 4-year-old grandson, Micheal, with only a hired girl for help. In Nora’s grief and her desperation to cure her grandson, she becomes convinced that fairies–the Good People–have taken the real Micheal and left a lookalike substitute in his place. Mary, the hired girl, watches in increasing discomfort as Nora tries one folk remedy after another on the advice of the local wise woman. Mary herself is pulled into a last effort to “put the fairy out” of Micheal, with tragic consequences.

The appeal of Kent’s otherwise dark plot is the sympathy she evokes for the characters. Nora, Mary, and the other members of the heavily female cast are powerless against the death that stalks their families, and nearly powerless in the face of the patriarchy. Their attempts to master the world’s chaos with herbs and charms might seem ludicrous to the local magistrate (and the modern reader), but Kent deftly guides the reader into a great sympathy for these women. Any woman who has prayed by the bedside of a sick child will see a ghost of herself in Kent’s good people.