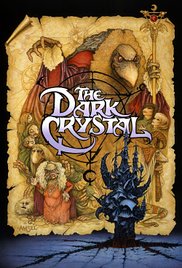 “In another time, in another place, in an the age of wonder…”, this is how Jim Henson and Frank Oz’s 1982 mystical puppet epic, The Dark Crystal, begins its weird tale. We follow a young Gelfling by the name of Jen, the last of an ancient elven like race who races against time to heal the ancient and immensely power dark crystal. The film was also the first in the history of cinema to have an entirely puppet/animatronic cast and feature no human beings through out it’s entire 93 minute run time. Admittedly, some of the faces of the puppets do occasionally dip into the “uncanny valley”, but the story and craftsmen ship behind the film make up for this fault in spades. From every mountain top to every blade of grass, the love that went into shaping an entire from scratch (a task that would more than likely be handled by a CGI depart these days) shows a rich world with depth that only Jim Henson could deliver. Often times much darker than anything Henson had done before or afterwards, this movie is not for the faint of heart and is geared more towards young adults, which only adds to the appeal in my opinion.