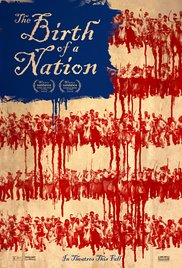 If you think you’ve heard of a movie called The Birth of a Nation before, you’re right. One of the first movies ever made was named that, a 1915 D.W. Griffith film that celebrated the rise of the Ku Klux Klan. One hundred and one years later, the new The Birth of a Nation dramatizes a historical slave revolt and celebrates the bravery of its leader, Nat Turner.

You probably learned about the Nat Turner rebellion in high school U.S. history, and you probably don’t remember much about it. That’s what I love about well-made historical novels and movies–they make the dry pages of history come to life, with real people and real emotions and, occasionally, very realistic blood and guts. Good movies can fill in the gaps in our educations and memories.

The Birth of a Nation is one of those movies. You aren’t going to pop in this DVD and grab a bag of chips for a fun Friday night. But you should see it, so Nat Turner and his importance in history aren’t just a half-forgotten history lesson.

I do have one quibble with the storytelling. I don’t expect complete historical accuracy from movies–that is the price you pay for an enjoyable narrative arc–but I don’t think writer/director/star Nate Parker was entirely even-handed. He doesn’t flinch from showing the brutality of slavery–beatings, rape, and murder of enslaved people are all shown in gory detail. But Parker did not depict any killings of white women and children by the rebels–the only murders shown are those of male slaveholders. In fact, historically, the rebels did not spare people in consideration of age or sex. I wish Parker would have chosen to be more honest in that particular.