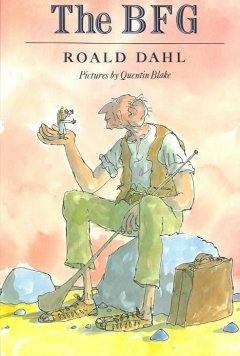 As someone who has performed on stage in many children’s theatre shows, I always enjoy coming across material that is enjoyable and imaginative for both kids and adults. BFG is just that type of book.

Little Orphan Sophie finds herself in the land of Giants after having spotted the BFG, short for Big Friendly Giant, at night in London. Taken to the country of giants, a place with nine “human bean” eating giants that are twice the size of BFG, Sophie must devise a plan to get her way back home after being informed by the BFG that she will now have to live with him in the country of the giants for the rest of her days. After experiencing fear and trepidation, Sophie comes to learn that BFG is in fact a big, friendly giant. What’s more, the BFG reveals and explains to Sophie many mysteries of his world, showing that although he may educated, he is still a very intelligent giant. In fact, both Sophie and the BFG learn a great deal from each other, with both coming to respect the different view points each has towards different ways of life. Such respect leads to Sophie and the BFG eventually making a return to London to enlist the help of the Queen to rid the country of the nine giants whose diet consists of nightly meals of humans. So as not to ruin the rest of the story, I’ll stop my summary here.

Like Matilda, Dahl does include some darker themes in this story, including giants heading to various countries to take people from their beds and eat them for dinner. Perhaps most concerning for younger readers is an episode in which we learn of the giants having eaten kids for dinner and leaving their bones behind. However, there is also plenty of lighter and fun material here, including the many sayings the BFG constantly mixes up, the words used to describe certain elements of giant-life, and even an episode discussing the difference between humans’ carbonated drinks and giants’ carbonated drinks (hint: one causes burping, the other causes…well, I’m sure you can imagine). Along with this, there is a fun twist at the end that a person of any age will appreciate. While it may be a bit predictable for adult readers, the ending will put a smile on the face of every reader, no matter their age.

I’d recommend this book for any adult who is longing to reconnect with their childhood imagination and for any kids 10 years old and up, with perhaps more mature younger readers being able to handle the darker elements of the story.