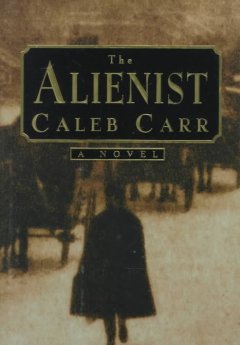 The Alienist is not a new book–it came out in 1994. But there is a new TV show based on the book, and being the good little librarian that I am I figured I should read it before I watch it. Clocking in at more than 450 close-printed pages, The Alienist was a bit of a time commitment, but I’m very glad I read it. It is a truly excellent novel.

The titular Alienist is Dr. Laszlo Kreizler, a pioneering psychologist working in 1890s New York. But he is not the narrator. We get the story in the words of John Moore, a newspaper reporter who is an old college pal of Kreizler’s. In this way, as in many nineteenth century novels, the focal character is not the “main” character. I suspect if I broke into author Caleb Carr’s home and raided his bookshelves, I would find well-thumbed editions of Willkie Collins and Arthur Conan Doyle, because his writing style seems very influenced by those nineteenth-century classics.

At the beginning of the novel, Moore and Kreizler are thrown together again at the request of the New York City Police Commissioner, a guy named Theodore Roosevelt. (You may have heard of him.) Roosevelt has tapped the duo to catch a serial killer who is preying upon male prostitutes in the spring of 1896. Moore and Kreizler assemble an unlikely team of experts, including the city’s first female police detective, two brothers with serious CSI skills, and a reformed murderer. As the investigation proceeds, the team gets ever closer to identifying the killer, but they also become embroiled in conflicts both personal and professional. Carr masterfully handles what seem like a hundred threads of storyline, so the reader never feels overwhelmed with the sheer amount of information he is throwing at us. Only a few times did I see even a murky step beyond the investigators, which I count the mark of a good mystery.

The characters get a tad tired at times–they don’t always seem entirely real. But the excellent twisty plot and heaps of period authenticity easily make up for their two-dimensionality. I get the feeling that the characters–Moore especially–are just necessary foils for the real show, which is the history of criminal psychology and forensics. I learned more reading this novel than I’ve learned in plenty of actual history books.

Now that I have finished the book and am all set to watch the show, I find myself hesitating. A book that is so cunningly crafted will be very difficult to reproduce with the same depth on-screen. Maybe I’ll just read the sequel instead.

One thought on “The Alienist by Caleb Carr”