I really enjoyed this story of falling in love, experiencing heartbreak at the ends of tragedy, all the while being on a quest to search for answers. In this novel, Sylvie, a ballerina, sets out to find her older sister, Julia, who left a year ago leaving no clues or any traces of where she’s gone behind. When Sylvie receives a package in the mail from her, everything changes. The book follows her on a journey that ends up changing her forever. I think this story is beautifully written with it’s touches of magic here and there and the way it goes deep into Sylvie’s past to show how she develops as a character. I would categorize this novel as fantasy/fiction. Anyone who loves a good mystery with touches of romance and fantasy, this one’s for you.

Call of the Night is about Nazuna, a vampire woman, and Ko, a human boy. At the beginning of the story, Ko finds himself suffering from insomnia and apathy. He no longer attends school, has no friends, and decides to start going out in the middle of the night. When he meets Nazuna, he decides to become a vampire, since the nightlife is far more exciting than being awake during the day. Unfortunately, in order to be turned by Nazuna, he has to fall in love with her. And just the word “love” makes Nazuna squeamish.

I enjoy the humor of this manga. It isn’t necessarily groundbreaking, but it is enjoyable and a quick read. The art is wonderful and stylish and the characters are likable. I’m definitely looking forward to reading volume two.

This manga is meant for older teens and adults as there is some suggestive content.

In Chattana, all of the light is held and created by one man – the Governor. Pong, who was born in prison, believes that light is the key to freedom and hope. As the story progresses, he comes to realize that first impressions can be deceiving. Similarly, the prison warden’s daughter, Nok, must come face to face with what she believes about the world, and about herself. The setting feels both familiar and otherworldly, and draws the reader in gently.

This book has something for many different kinds of readers. If you like adventure, fantasy, mystery or books about friendship, this might be your next read. There are also themes of justice, hope, self-discovery, and bravery. I highly recommend this 2021 Newbery Honor book!

This book series is perfect for lovers of fantasy! The book is narrated by the main character and despite the dangerous adventures he faces, his snarky, witty, and overall humorous telling of his story makes this a must-read for all ages!

The Circus of Stolen Dreams by Lorelei Savaryn was a quick, atmospheric read. Andrea’s brother disappeared three years ago, and she wishes she could just forget about it all. When she discovers Reverie, a magical circus in the woods, she thinks she’s found what she’s looking for. In the circus, children can experience all the dreams and fun they could ever want. However, Reverie turns out to be much more sinister than it initially appears.

I enjoyed this book. The concept was interesting and well-executed. The writing flowed nicely, and the characters learn to grapple with difficult things. I thought I would be able to predict the ending, but the it was better than what I had imagined. I also really enjoyed reading about the different dreams the children experience within the various circus tents. I would definitely recommend this book for middle-grade readers who like fantasy stories, family stories, and a mysterious circus atmosphere.

Something about this book fell a little flat for me, which was a bummer because I really wanted to love it. It was interesting and I wanted to know what would happen, but I wasn’t all that attached to the main characters. I actually was more interested in Marcus, Melia, and Maia—some of the various side characters. I also liked the setting and the magic system on which the world operates. I was intrigued by the book’s premise. However, the story as a whole felt underdeveloped. Many of the character relationships felt rushed and a little unrealistic (it is a fantasy novel, but I still expect the relationships to make sense). The big reveal surrounding one of the royal siblings was creative and interesting, but I didn’t feel like there was enough of a foundation established for that reveal to feel organic. There is supposed to be a sequel, so maybe this book was more about setting the stage for the main event. I will probably pick up the next book to see how everything comes to and end, but it won’t be high on my list of reading priorities.

This book is truly magic. With twists and turns that are unpredictable. The main character is Brystal Evergreen. Her life started out as just a girl in a lonely village with no comfort. But as the years passed she and her friends made a big impression on the Northern, she discovered a big secret about Mrs.Weatherberry, and then she was entitled the name of the Fairy
Godmother. Also, she spoke to the Government about the unfair laws about what women can do and what they can’t. Brystal and her friends were just children who were abandoned by their parents but without that cruel act, her greatest achievements could not have been done. Brystal is Solicitous, Brave, and Assertive. She lets nothing get in her way even if she is hurt. Brystal is proud of herself yet has compassion towards others. This story is magnificent and if you like this book you will surely like others of Chris Colfers series. The genre of this book is fiction and has a bit of magic. I rate this book a 10/10 because it has a plot and the feeling you get reading the book is unique.

Much, much more than a novelization, Cornelia Funke’s illustrated adaptation of Guillermo del Toro’s 2006 award-winning Spanish film is spellbinding.

Set in 1940s war-torn Spain, this dark fairy tale introduces us to a young girl named Ofelia who is working on completing dangerous tasks in the forest to prove to a wily faun that she is the long-lost princess of an underground kingdom.

As a lover of the film, I wasn’t sure what to expect but I’ve been a Cornelia Funke fan since The Thief Lord (a magical Venetian adventure) and I was drawn like a magnet to this collaboration.

Slightly over-sized for a novel, with atmospheric ornamentation in the margins and stunning black and white illustrations sprinkled throughout, the book itself feels as magical as the text.
It shocks me to say this, but I think I actually love the book more than the movie! The film gets a little too gory for me at times and reading those scenes makes it easier for me to picture as much or as little of the disturbing imagery as I can handle.

Whether you’ve seen the movie or not, I recommend this book to anyone who relishes excellent storytelling and the bloodier side of fairy tales. 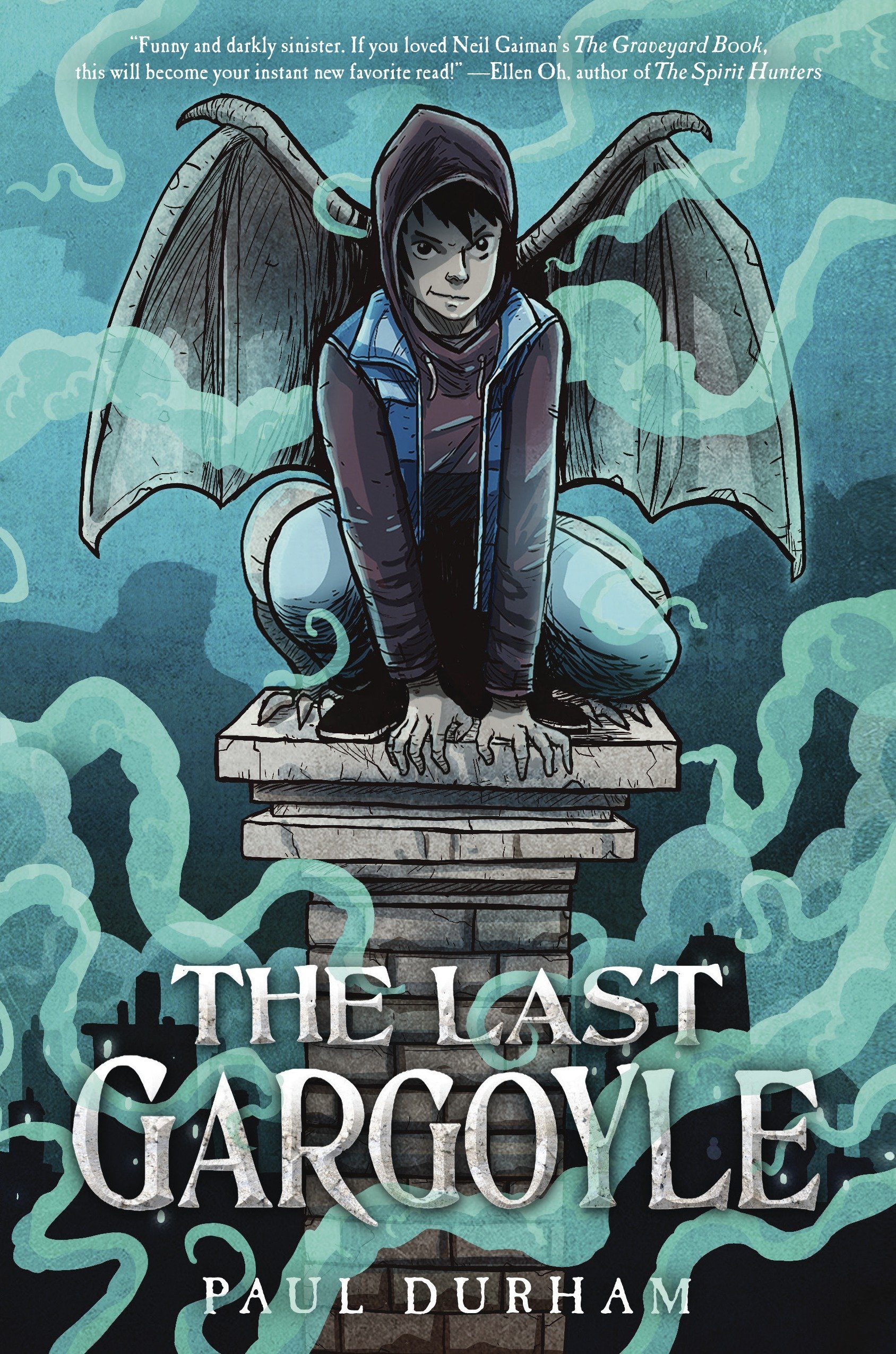 Penhallow is a gargoyle living in Boston who defends those who live in his area. When two other gargoyles are attacked, he begins to wonder if something more sinister is happening. With the help of a strange girl name Viola, he investigates who is behind these vicious attacks.

This book would be great for an older middle school child who like fantasy and horror mixed together. This is the first book in the series. It will be interesting to see where this series goes from here. 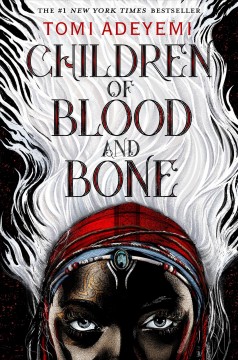 “Perhaps you think you’ve heard it all from the “Young Adult fantasy fiction” genre. Between the Twilight, Hunger Games, Divergent, etc.

You would be wrong.

Tomi Adeyemi’s debut novel has been tearing up the literary world both for it’s brilliance as well as for the bidding war that it caused when released (a movie adaptation is already in the works, naturally).

Zelie Adebola is our heroine from the fantasy world of Orisha, where magic, once practiced and loved by its people, is now forbidden thanks to the evil King Saran. Zelie, along with her brother Tzain and a few friends and enemies along the way, venture from her homeland on a quest to bring back magic. The simple premise is anything but: issues of class, race, and systemic violence are all discussed and played out, sometimes to horrible effect.

Adeyemi is a young author and I would be lying if I said that it doesn’t show. She repeats herself a fair amount (i.e. the characters all have the same favorite curse words that are used ad nauseam) but I am really nitpicking here. Her writing was everything I want in a novel: I was racing to the finish to find out what happens while simultaneously dreading the inevitable wait for the sequel. A stunner.