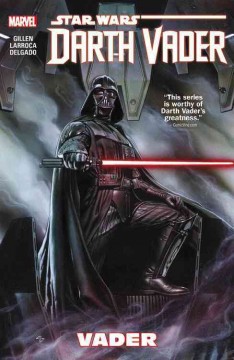 Finding a fresh take on a character that has been around for 40 years is never an easy task, especially if that character has become a beloved pop culture icon. But the first volume in Marvel’s Darth Vader series finds a way to do just that. Taking place after the events of Star Wars Episode IV: A New Hope, we follow a now disgraced Darth Vader as he tries to not only win back the favor of The Emperor, but craft a secret plot to locate the young X-wing pilot who destroyed the Death Star and find out his identity. This series shows the day to day workings of The Lord of the Sith, and it is nothing short of fascinating. What is striking about this comic is how it manages to inject humor into the story without toning down Vader’s true brutal nature. Often times, Vader finds himself as the straight man to characters far more comfortable joking around then himself. The realistic art style brings depth to each panel, giving emotion to Vader’s lifeless mask and hulking dark figure. The entire comic adds insight to the character of Vader and gives readers a far more intimate depiction of Vader than film audiences have been able to experience. A must read for any Star Wars fan or any one interested in knowing what really lurks behind the mask of one of cinemas greatest villains.