Older Than Dirt: A Wild but True History of Earth / Don Brown and Dr. Mike Perfit

Sibert-Honor winner Don Brown brings us a graphic novel about world geology. Perfect for science class as well as anyone curious about our globe, a humble groundhog guides us on a tour through the planet’s natural history and describes the different stages of the Earth’s evolution as well as the incredible natural forces constantly at work. (J GRAPHIC 551 BRO)

CatStronauts, you are needed! Alerted to a global energy crisis, the President consults with the World’s Best Scientist, who suggests sending a special group of astronauts to turn the Moon into a solar power plant. (J GRAPHIC BROCKINGTON BK.1)

In a future where alien beings consume technology as a few humans try to preserve it, Strata, her brother, and a friend are separated from their caravan and, with a wonderful robotic horse, must fight their way back. (J GRAPHIC HALE)

As if slinging hash in the school cafeteria isn’t exciting enough, Lunch Lady has a secret life as a crime-fighting superhero! And she’s noticed that something about the new substitute teacher, Mr. Pasteur, just doesn’t seem right. But while Lunch Lady is busy investigating Mr. Pasteur, students Hector, Terrence, and Dee are investigating her. (J GRAPHIC LUNCH LADY BK.1)

Anne Shirley, an eleven-year-old orphan, is sent by mistake to live with a lonely, middle-aged brother and sister on a Prince Edward Island farm. With red hair and a wild imagination, Anne takes Green Gables by storm. (J GRAPHIC MARSDEN) 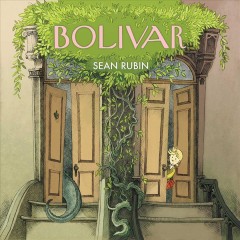 Living a quiet life in New York City, Bolivar, a dinosaur, finds his life complicated when Sybil, the girl next door, tries to prove his existence. (J GRAPHIC RUBIN)

Depicts five imperiled worlds that will be rendered extinct unless five ancient and mysterious beacons can be lit in the wake of erupting wars during which three unlikely heroes make surprising discoveries about their homes and themselves. (J GRAPHIC SIEGEL BK.1)

In a semi-autobiographical graphic novel, Raina’s disappointing bond with a cranky, independent younger sister is further challenged by the arrival of a baby brother and an estrangement in their parents’ marriage. (J GRAPHIC TELGEMEIER)

Never a conventional princess, Harriet becomes an adventurer after learning she is cursed to fall into a deep sleep on her twelfth birthday, but after two years of slaying ogres, cliff-diving, and more with her riding quail, Mumfrey, things go awry at home and she must seek a prince to set things right. (J GRAPHIC VERNON BK.1)

“The first time I read an excellent book, it is to me just as if I had gained a new friend. When I read over a book I have perused before, it resembles the meeting with an old one.” ~Oliver Goldsmith