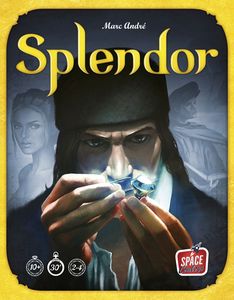 As a gem merchant in charge of a guild you are trying to amass the most gems, artisans, and patrons to your side so that your guild outshines all the others around you. This card development game has you choosing gems with which to buy developments, which in turn, allow you to attract nobles. You win the game by collecting 15 prestige points.

This is a nice addition to game nights for causal players or players who are getting into deck building games. The light strategy elements give it replayabiltiy while leaving enough room for chance to still play an important role in winning. The length of game play means that its probably best paired with several other light games rather then as an opening or ending game when first learning. I found this game to be best played with an even number of players, I prefer it with four to maximize all the elements of the game.