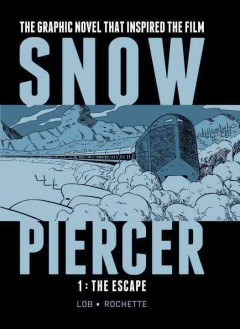 Snowpiercer is a French graphic novel that inspired the 2013 film by the same name. I remember seeing the trailer and hearing good things about the film. I decided to read the graphic novel first and then watch the film version. The graphic novel is about environmental apocalypse where the world has frozen over to temperatures that will kill in seconds and no place is safe from the cold. Expect for a very special (originally a luxury) train that needs no tracks or fuel and is warm enough on the inside to keep people alive. Only some people were lucky enough to make it on the 1,001 car train; the rest of humanity perished. And if trying to stay warm wasn’t hard enough there is also a large disparity between the rich and the poor. The tail train cars are crammed with the poor and downtrodden, never getting a moment alone, always having to be around everyone else. What is left of the government and military control the cars near the head of the train which get progressively fancier and less populated. The book follows Proloff who comes from the very tail end car and ends up making it past a barrier into the middle class cars. He is on a mission to only move forward and to find answers about their situation and who drives this mysterious train.

I really enjoyed the fleshed out world and the visceral plight of the survivors. It’s very gritty with some sprinkles of humor and a plethora of interesting characters. If you saw the movie I highly recommend the source material.