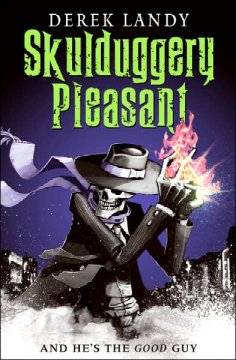 Skulduggery Pleasant is a (so far) 5 book series about a girl named Stephanie Edgely (aka Valkyrie Cain) whose uncle–the famous writer of horror novels, Gordon Edgley (much like Edger Allen Poe)–has passed away. But when she attends the reading of the will, it is revealed that her uncle has left her his mansion and royalties to his books, which she will receive when she turns eighteen. But what she saw her uncle as was not the half of it. After spending a night in her uncle’s house she is plunged into a magical world of spies, murderers, and Skulduggery Pleasant…

Skulduggery Pleasant is an amazing series in whole. Every book ends (mostly) with all ends met, but cliffhangers are not off limits. The book has its share of violently described scenes but is suitable for those 10 years and above. I highly recommend it.

One thought on “Skulduggery Pleasant by Derek Landy”