Home » Reviews » Rin Tin Tin: The Life and the Legend by Susan Orlean 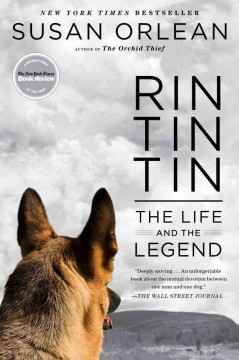 On September 15, 1918, during the first large American offensive in World War I, a U.S. soldier came across a bombed-out German dog kennel and found a frantic female German Shepard with five puppies who had survived the bombing. That soldier, Lee Duncan, found homes for the dogs during wartime and kept two for himself. One of those dogs would go on to become the legendary canine movie star Rin Tin Tin. Developed in 1899, the German Shepard breed was virtually unknown to most of the world. That would soon change.

As an author of a book on World War I, I enjoyed Orlean’s book very much. It is well written and researched. Many of the facts surprised me . . . such as there were 16 million animals deployed in the Great War. Families gave up their dogs for WWII, when Rin Tin Tin (not the original dog) played a important role in recruiting and training dogs for the war effort with many never returning. If you are a dog lover, or are keen on Hollywood and television history, I recommend you check out this nonfiction book.