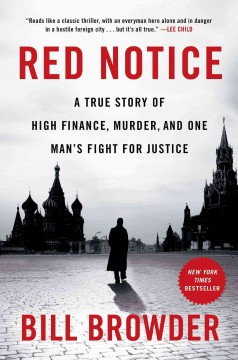 This book provides the reader with a first hand account of the current state of world affairs as seen by someone who lived on the world stage. Bill Browder was a world investor, who evolved into an activist. The book conveys the story of his life to date. Parts of his family history were interesting. Parts of his business career were not (unless you’re into financial stuff). But I would urge you to stay with this book…..the second half gets interesting and reveals a world stage few of us will ever experience. The story Mr. Browder tells, reveals the current state of affairs in Putin’s Russia. The reader becomes aware of the inner financial set up that exists in Russia. Unless you are a political news junkie, this book will provide the reader with a new pair of glasses to see the current events that involve Russia through. The book describes how Putin has instituted a framework involving oligarchs and a money scheme that supports its inner workings. The nature of Russia as a democratically elected government is totally inaccurate and the country is literally corrupt from the inside out. Beside being built on financial gains the system that exists promotes thuggery. The thuggish nature of Putin and the government he promotes should concern us all. Recent stories throughout the world tell us thuggish acts are happening outside of Russia and yet they are connected to Russia. Because of his involvement in the Russian financial system, Mr. Browder was touched by the thuggish nature of the Russian government. The book tells how he took steps to guard himself from danger while uncovering and educating others about Russia. Most of Mr. Browder’s associates also took precautions. Unfortunately, Sergei Magnitsky was a victim in this story. His story is important and deserves to be told (and read). Sergei believed in the paper ideals of Russia and what his country could/should be. Because of the intertwining of their lives Bill Browder became an outspoken activist on bringing sanctions to Russia. The sanctions that exist bear Sergei’s name and hurt the corrupt nature of the Russian oligarchy framework. They are necessary to the future of a peaceful world. While I appreciate the mainstream news outlets carrying stories of the Russian government this book gives the reader a back story that is interesting, informative, and necessary. A definite must read!!