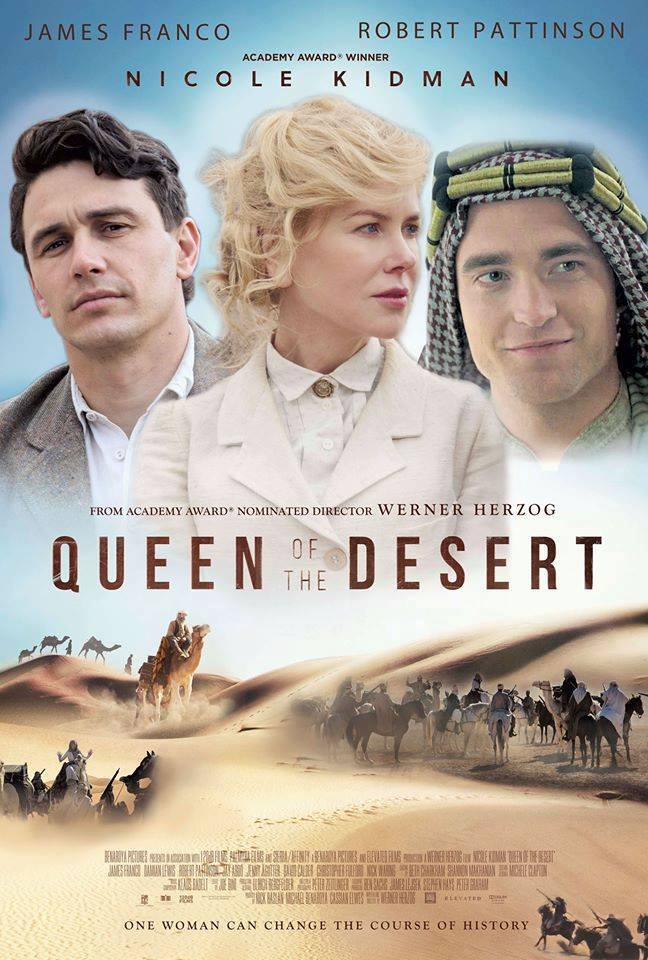 Queen of the Desert was a snooze in the truest sense–I fell asleep with about 20 minutes left to go in the movie. The story of Gertrude Bell, English gentlewoman adventurer in the Middle East, should have been riveting, but I simply couldn’t bring myself to engage with the characters.

The film opens around 1900, with a youngish Gertrude (Nicole Kidman) bemoaning the tedium of life in England. My first thought was that Nicole Kidman, nips and tucks notwithstanding, is too old to play a debutante. I understand the filmmakers had to choose an actress who could portray Bell at the ages of both 30 and 50, but if I were doing the casting I would have erred on the side of youth. Worse casting woes were yet to come. Gertrude persuades her father to finance a trip to Tehran, where she immediately falls in love with both the desert and British diplomat Henry Cadogan (James Franco). All I can say is that there must have been some Pineapple Express involved when the casting director chose Franco for the role. The little attempt he makes at a British accent falls so flat, one almost wishes he would have just gone Kevin Costner and not tried it at all. And the near-constant smirk that has served him so well through such fine films as This Is the End and Why Him? clashes violently with the dopey, lovelorn Cadogan character. I was actually relieved when Gertrude’s father refused to allow their marriage and Franco made his exit, stage left.

Of course, this romance seems to have been made up out of whole cloth for the purposes of the filmmakers. Because a woman must have suffered a disappointment in love in order to choose to break the bonds of polite society, right? Right? So Gertrude takes her broken heart into the desert and apparently becomes an expert on the peoples of the Middle East. We never get to see much of her interactions with the indigenous population she is meant to be studying. The next hour or so of the movie sees her riding her camel across desolate vistas, with a small train of brown men, besting each male authority figure she meets. She defies the Ottoman army, the British consul, and a Druze sheik, and we are meant to marvel at her bravery. The mood is lightened for a few minutes by her meeting with a delightfully fey Lawrence of Arabia (Robert Pattinson), then it is back to the old camels-and-sand show.

Why is it that a film about a pioneering woman can’t leave the glass ceiling storyline alone? I can’t help but think that a very good story was squeezed out by the director’s compulsion to hammer away at the patriarchy with these repetitive Gertie-versus-The Man vignettes. Certainly lost in the shuffle was any accurate portrayal of the desert peoples to whom the real Gertrude Bell devoted her life. Shame.

I dozed off shortly after the start of the Great War, so maybe the film got better in the last few minutes. But I won’t be revisiting Queen of the Desert to find out. Instead, I think I’ll check out the biography Desert Queen, by Janet Wallach, to find out a little more about the real Miss Bell and her world.