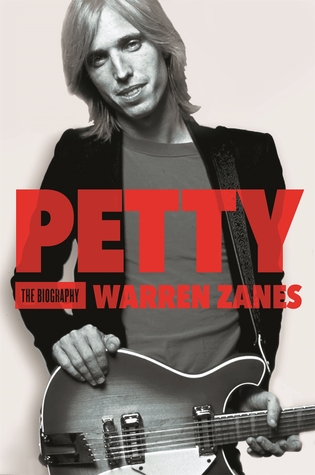 I have never before read the biography of a rock star, but Tom Petty and I have a long history. I have been a fan since I danced in my living room to “Free Fallin'” at the age of 5. I have every song he ever recorded on my iTunes, and I have seen the Heartbreakers in concert seven times. My husband and I met because of a shared love of Tom Petty’s music. His death in 2017 hit me hard; I felt like I had lost a close friend.

Warren Zanes’s biography of Petty, published in 2015, helped me appreciate his unique contribution to American rock and roll, but it didn’t give me much insight into Petty as a person. Zanes begins with the usual David Copperfield stuff–Tom was born, Tom grew up, etc. I had no idea that Petty played with Bernie Leadon, one of the founding members of the Eagles, or that his band Mudcrutch had a record deal before he formed the Heartbreakers. I wish the author had given me more of a sense of how Petty developed his songs, but those details are lacking throughout the book.

Much of his life after 1976, Tom Petty spent in the “album cycle”: write songs, record an album, tour to promote the album, repeat. I was very interested in learning about how this process works, but after the third album I caught on and didn’t really need it reiterated. Zanes highlights Petty’s collaborations with famous producers like Jimmy Iovine and Rick Rubin, but in my opinion he doesn’t discuss the Heartbreakers enough (other than to say that Stan Lynch, the band’s first drummer, was universally disliked). He also doesn’t share many stories about touring. I wasn’t expecting to find the line, “And there was a brown-haired girl who yelled ‘I love you, Tom!’ at the Summerfest show in 2011,” but I think fans like me would have enjoyed an acknowledgement of their experiences in the great man’s presence.

Tom Petty was always known for his (relatively) quiet life and private ways. Zanes seems to have gotten a few layers deeper than most reporters into Petty’s private world, but there is still plenty of mystery left about the man. The only vaguely salacious details Zanes shares are the story of Petty’s depression and heroin use in the late 1990s, and a wink and a nod regarding Petty’s professional relationship with Stevie Nicks. Maybe Tom Petty’s personal life really was so boring that it doesn’t bear much investigation, but I have the distinct suspicion that he kept his shell firmly in place when talking with Warren Zanes. I guess I’ll have to resign myself to never knowing what exactly made Tom Petty tick.

If you are a fan of Tom Petty’s music and want to know more about how it was written, performed, and recorded, this biography is for you. If you want a tell-all about one of rock’s most iconic artists, I suggest you check out Keith Richards’ memoir.