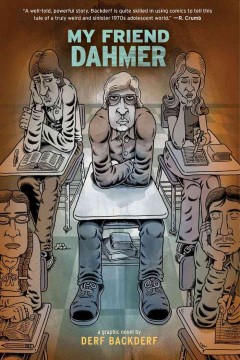 The grisly and deplorable crimes of serial killer Jeffery Dahmer have equally repulsed and fascinated the general public for almost 30 years. But, it is in cartoonist John Bacderf’s autobiographical graphic novel “My Friend Dahmer”, that gives the most intimate deception of Dahmer and his tortured adolescent as well as the closest we may ever come to an explanation as to why his horrid crimes were committed. The novel chronicles the lives of a young Backderf (known as simply “Derf”) and his group of friends as they navigate through high school in the late 70’s. Their paths soon cross with the mysteriously quiet loner of the school, Jeff Dahmer, who’s odd outburst and strange demeanor captivate Derf and his friends. The book gives the perspective of the only group of people who could genuinely, for a time, have called Dahmer their friend, and that’s what makes it such an engaging read. Derf has compiled information from just about everyone who came in contact with Dahmer at this time to paint a well rounded factual depiction of what transpired over the course of their time in school together; it is as interesting as it is tragic. We’re not shown a monster, but a young man who struggled with demons of an unspeakable nature that occupied his every waking moment. Although the book does take a clear stance, no one was more responsible for the crimes of Jeffery Dahmer than Jeffery Dahmer. He and he alone made the choice to give into his demons. This book is the tail end of one boys desperate fight to retain his humanity. A fight that he wouldn’t, or ultimately couldn’t, win.