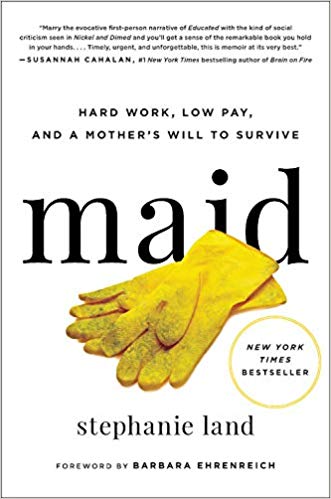 The official title of this memoir is Maid: Hard Work, Low Pay, and a Mother’s Will to Survive. I have read a few other memoirs recently, written by youngish white folks who grew up poor (Heartland by Sarah Smarsh, Educated by Tara Westover, and Hillbilly Elegy by J.D. Vance come to mind). And I’m kind of surprised that this type of book seems to be a growing trend.

Not that I’m surprised that there are millions of Americans living in poverty—that’s not exactly news. The income disparity in this country has been increasing since the 1970s and shows no signs of abatement. But I am legitimately puzzled by the fact that publishers (and readers) are apparently gobbling up I-used-to-be-poor memoirs. Let’s look at some possible reasons why.

1. Poverty voyeurism: There has always been an interest among the well-to-do in seeing how the other half lives. Jacob Riis was taking photos of slums and their denizens more than 100 years ago, and readers were chuckling at the antics of Dickens’s London poor more than 150 years ago.

2. Interest in white poverty: As I noted before, all the authors of these bestselling memoirs are white. Perhaps well-to-do white readers unconsciously associate “poor” with “black” (c’mon, Reaganites, we all know what color you imagine those “welfare queens” to be), and they are therefore shocked to learn that there are poor white Americans out there, too.

3. Bootstraps narrative: All these memoirs also have a common ending: the poor white protagonist gets an education, gets a lucky break or two, and by dint of hard work and perseverance is now enjoying a middle-class lifestyle. I don’t mean to denigrate Land or the other authors I mentioned. They have earned their success, probably more than I have earned mine. But I do think there is something comforting to their readers hidden in this narrative: the idea that anyone can overcome poverty if they just work hard enough. Of course, the research of Barbara Ehrenreich and many others in the fields of economics and sociology gives the lie to this “bootstraps” narrative.

Those are just my thoughts, and I may be completely incorrect about why Land’s memoir and others have been published to so much acclaim. And, by all means, read them. It’s good to learn about the lives and experiences of other people. But read Maid, Heartland, Educated, and Hillbilly Elegy with your mind open and your bias detector switched on.