Home » Reviews » Lily and the Octopus by Steven Rowley 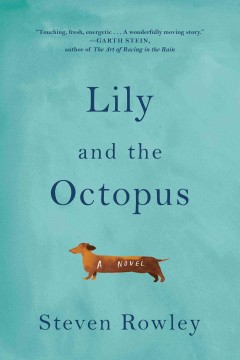 As man-and-dog stories go, this is a great one. The dog, Lily, is absolutely delightful from the first page. She speaks in capital letters with exclamation points (“OH! BOY! TOFURKY! IS! MY! ABSOLUTE! FAVORITE!”), which anyone who has ever known a dachshund will immediately recognize as accurate. She is both snarky and supremely lovable.

The man, Ted, is not quite as lovable. He is emotionally closed off from the humans around him, and he seems a little mentally unstable. But his relationship with Lily is magical. That is one of the best things about the book–it portrays the wonderful unconditional love that humans and dogs can share.

The octopus–Ted’s name for Lily’s brain tumor–is decidedly unlovable. It, too, is personified, and it speaks with Ted on several occasions. This occasionally veers from magical realism to acid dream territory, as when Ted hallucinates an epic sea battle pitting him and Lily against a shape-shifting octopus. But the eventual outcome is as heartwarming as it is heartbreaking.