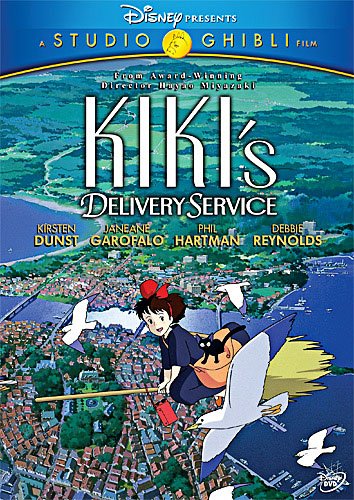 Hayao Miyazaki has crafted some of the most breath taking and magical animated feature films ever created. Often, his films present a grand and immersive atmosphere that engulf the viewer with a sense of awe, taking us to a world that we know is fictitious but is presented with such depth, detail, wonder, and love that the audience is emotionally drained by the time the credits start to roll. But for a filmmaker that has crafted astounding large scale animated features, it’s 1989’s “Kiki’s Delivery Service”, that has left the biggest impact (at least on myself). A small and contained story about a 13 year old with who goes out into the world to discover herself and learn the witch’s way, this movie features no demons, monsters, or even a straight up villain. We simply follow Kiki on her journey, and it’s being a companion on her journey that is the best part. We soar up in the sky with Kiki and feel the wind blow through her hair (flying being a major element in almost every Miyazaki picture), we feel her all too human fear of being the strangers in a new community not only as a witch but as a 13 year old girl .The film doesn’t need to follow any contrived notions that other animated pictures fall prey too all too often. Seeing Kiki live her life and interact with the beautiful world around her is ultimately what entices the viewer. This movie is nothing short of magic.