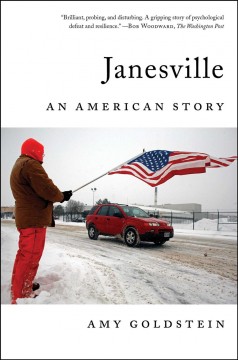 Janesville: An American Story should be required reading for everyone who lives in Wisconsin. Or, at least, anyone who wishes to vote in Wisconsin.

Let’s back up. I moved to Wisconsin in 2011, two years after Janesville’s General Motors plant shut down, and a year before the gubernatorial recall election. I was coming into a political and electoral situation that I didn’t understand, and I found frankly bewildering. I wish I had had this book to help me figure out what the heck was going on, so I could be a more informed voter than I was in 2012.

Janesville: An American Story chronicles the fallout from General Motors’ 2008 announcement that it would shutter the Janesville plant that had been in operation since 1923, and had afforded generations of Janesville residents a middle-class life. The author, Amy Goldstein, followed several families affected by the shutdown for five years. Their experiences–some positive, too many negative–demonstrate how devastating the loss of a good-paying job can be, for a person, a family, and a community.

The author also does an excellent job of relating these families’ personal stories to the economic and political struggles of Wisconsin as a whole. When I was a new Wisconsin voter, I had no idea why Governor Walker had it in for the unions, and vice versa. Goldstein covers (and clarifies!) this issue and more by explaining the differing responses of the Democratic-leaning UAW union and the area’s powerful Republican influences to the closure. Her exploration of the role of Janesville’s Congressman (and now Speaker of the House) Paul Ryan in the events is particularly interesting.

I would recommend Janesville: An American Story to any Wisconsinite who is interested in jobs and politics, and who–like I–aspires to be an informed voter.