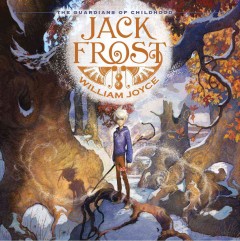 William Joyce has done it again! His Guardians of Childhood series continues with a spectacular picture book, Jack Frost. You know Joyce from his many quirky books for children, including the novels from this series about Nicholas St. North, E. Aster Bunnymund, and Toothiana. The beautiful pictures follow the tale of Jack, when he was called Nightlight, and saved the baby Man in the Moon from Pitch, the Nightmare Kind. At the conclusion of the battle, Nightlife fell to earth, and became lost. He could still sail and surf the icy clouds, but could no longer return to the sky. As he longs for the warmth he used to know, he turns all around him frosty, and becomes known as Jackson Overland Frost. The Man in the Moon shines down, and “As if carried by the light of the Moon, memories of courage and kindness surround Jack and guide him on…” Come for the illustrations. Stay for the story.