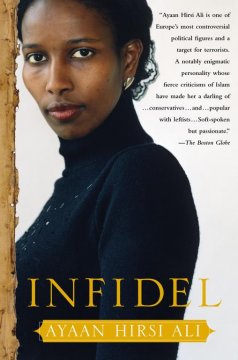 Infidel is a memoir detailing the astonishing journey of Ayaan Hirsi Ali. Growing up as a Muslim in Somalia and Kenya, Ayaan’s extremely oppressive upbringing was fueled by religious superstition. She is forced to undergo female genital mutilation as a child. Then in her teens, she’s pushed into an arranged marriage with a distant cousin. Ayaan chooses instead to flee her homeland and claims asylum in the Netherlands. Once there she repudiates religion entirely, graduates from university, and becomes a member of parliament. Making enemies along the way with her erudite criticisms of Islam with special focus on how women are treated. Eventually necessitating around the clock security. Ayaan’s unflinching courage in the face of criticism and death threats is a testament to her conviction for making the world a better place for women and men in the face of religious dogma.