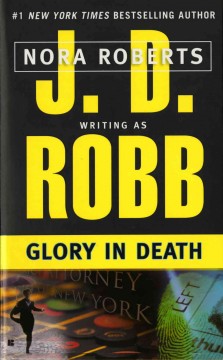 Eve Dallas is a tough New York detective who works to solve murder cases. This might seem like the beginning of a typical crime series, but what makes the In Death series stand out is the fact that the books take place in the future, the late 2050s and early 2060s to be exact. While there might be some new-fangled inventions in the future (cars that can fly, droid servants, AutoChefs, and drying tubes), the crimes and emotions are very real, human, and pertinent even for us readers today.

This series follows Eve and her cohort of comrades (Peabody—the quirky, girly, bubbly partner of Eve; Feeney—older, technology genius, fatherly figure and former partner of Eve; Dr. Mira—psychologist extraordinaire who helps Eve conquer her demons; Nadine Furst—reporter, strong-willed, pain in the butt (or so Eve would say), friend; and many, many more) as they attempt to solve horrible crimes throughout New York City.

And then we have to talk about Roarke for a minute. Roarke is a suave, sexy Irishman, who has a questionable past (always disliked the police possibly due to the fact that he was a thief), yet he falls in love with Eve, and ends up helping her with cases. It doesn’t hurt that he is a bajillionaire (seriously he has so much money!) and that he is a genius when it comes to technology (he can pretty much break in to any place). With Roarke by her side, and her coworkers (who end up being more like family), Eve tackles the best and worst that New York has to offer.

The In Death series is written by J.D. Robb. Robb is a pen name for Nora Roberts. I’ve really enjoyed reading all of these books, and getting to know the fun cast of characters that appear. This series is not short by any stretch, there are at least 45 books in the series, and Robb publishes 2 a year, so if you like this series (which I do) there is a lot of reading to be done.