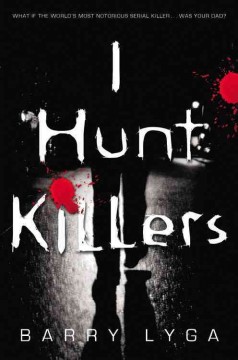 Book 1: I Hunt Killers, Jasper (Jazz) Dent is a complicated guy with a complicated life. His best friend, Howie is a hemophiliac who bleeds and bruises at a touch, and for whom Jazz gets tattooed in thanks for the extraordinary things Howie is willing to do for him. His girlfriend is the beautiful, strong, determined Connie whose father would rather have her dating anyone but Jazz. Neither of those defines him, though, as much as the fact that his dad is a convicted serial killer. No, his father, Billy Dent is THE convicted serial killer of the century, and lots of folks around Lobos Nod (and, possibly, the rest of the country) think Jazz may be one, too, because Jazz grew up being trained to be a serial killer by his “Dear Old Dad.” Things have calmed down a bit since Billy was put away four years ago, until dead bodies started appearing, looking suspiciously like the work of Billy Dent. Is it Jazz? Is it a copycat? All Jazz knows is, it’s not him, and offers his “expertise” to the local sheriff, G. William Tanner, and Jazz’s ability to see crime scenes from the killer’s point of view proves advantageous as the killings escalate.

Book 2, Game, has Jazz heading to New York City to help the New York police try to profile, ascertain and capture Hat-Dog Killer before he removes any more body parts from his victims as he dispatches them.

Book 3, Blood of my Blood brings the FBI into the mix, and Jazz races to find connection and solutions before Howie bleeds to death on the floor in Lobos Nod, and Connie perishes at Dent’s hands in a room in New York. Jazz knows he is the only one who can save his friends, and bring the killing spree to an end.

The writing is superb, the pacing is perfect, and the knowledge of serial killers, police procedure, and teenage pig-headedness is spot on. If you’re looking for a good heart-pounding murder mystery, you can’t go wrong with the I Hunt Killers trilogy.

I listened to the audio version of all three of these books, Book 1 as a Hachette Audio book, and the others from downloadable audio on Overdrive. Charlie Thurston is the narrator of all three, and is marvelous.