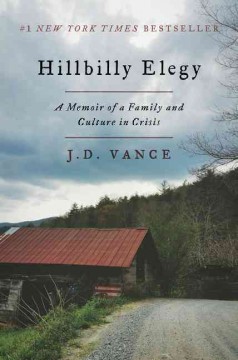 “Hillbilly,” a term that most of us would take as pejorative, is a badge of honor to author J.D. Vance. He is proud of his roots in impoverished Appalachia, and he doesn’t mind telling the reader so in this excellent memoir. He adored his gun-toting, foul-mouthed, big-hearted grandma, and thrilled to stories of the ancestor who supposedly began the Hatfield-McCoy feud. Pride, self-sufficiency, and devotion to family are some of the hillbilly values Vance and his people hold so dear.

But he is also remarkably clear-eyed when it comes to criticizing the failings of white working-class culture. Vance calls out his fellow hillbillies for abandoning their faith, ignoring the importance of education, refusing gainful employment, and abusing drugs. He doesn’t make excuse for his people, but unlike some social critics of the white working class, Vance criticizes from a place of love.

I wish the author would have given more concrete suggestions as to how the decline of the once-proud hillbilly culture can be reversed. But I suspect he thinks it’s too far gone to be saved, and all a loving son can do is elegize it.