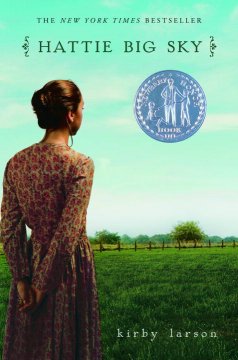 The year is 1917, and in the midst of World War I, sixteen-year old orphan Hattie Brooks moves to Montana, to work a land claim left to her by her uncle. Hattie Big Sky, a Newberry Honor book by Kirby Larson, tells the story of Hattie as she attempts to survive alone for a year in Montana, farming the land, and hopefully satisfying the claim. She receives help from an eclectic group of neighbors, but with World War I in the background, being friends with German immigrants can be dangerous. Will Hattie make it and claim the land for herself, or will she be run off by drought, mysterious fires, and others who want her land?

Larson’s first person narrative shows the struggles and hardships, but also the joy and camaraderie of farming the land in Montana. She accurately depicts how hard it was to make a living, but also happiness that could be found in the little things, like warm coffee or quilting with a friend. This novel shows a different side of World War I, living on the home front. The reader sees that Germans in the country were treated with suspicion. Through the narrative, letters to her soldier friend Charlie and her Uncle Holt, and a column in an Iowa newspaper, the story of Hattie is revealed to people, and everyone learns how hard, yet rewarding, her life is in Montana. In the end, Hattie learns that she can ask for help, that neighbors can be saviors, and that it is perfectly fine to have dreams as big as the Montana sky.