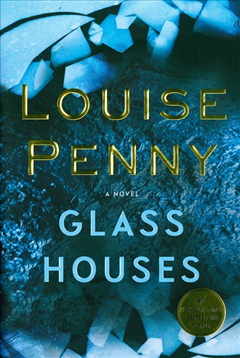 There are few series that can maintain consistently very high quality over the course of a dozen books. In fact, I can’t think of any at all, other than Louise Penny’s Chief Inspector Armand Gamache series. With Glass Houses, the thirteenth installment of the Quebecois mystery series, Penny demonstrates that she is still at the very top of her game.

This time, a mysterious medieval “debt collector”, shrouded in black, has turned up on the village green in Three Pines. Gamache, now Chief Superintendent of the Surete du Quebec, can do nothing to remove the creature–or protect it, when it is found dead in the church basement. The mystery that follows is, true to latter-day Penny form, a combination of the murder itself and larger social and political forces.

Fans of the series will already know Ruth Zardo, the cranky, elderly poet who haunts Three Pines with her foul-mouthed pet duck. Ruth plays a larger role than ever in Glass Houses, which satisfied me immensely. She is a character who deserves her own spin-off, the only one of the Three Pines regulars I think I could enjoy in real life. She, of course, would tell me to “f*** off.”

Those benighted few who have not yet read an Inspector Gamache novel shouldn’t start with this one. Some of the earlier books can be read as stand-alones, but the later books in the series rely too much on a shared history among the major characters for a newbie reader to catch everything. Since Gamache is a pleasure best enjoyed slowly, I encourage everyone to start at the beginning of the series.