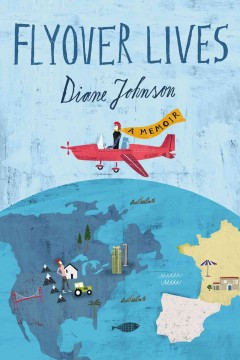 You might not know Diane Johnson’s name, but I’ll bet you a Coke you know her work. A novelist, biographer, and essayist, she is best known for writing screenplays, including The Shining and the film adaptation of her novel Le Divorce.

The structure of her memoir is novel (pun kind of intended), because it encompasses not only her own life but also the lives of several of her ancestors. Johnson says her inspiration for this book was a French friend’s offhand comment that Americans have no sense of history. So she sets out to explore at least her own family’s small corner of history and discover how her forebears’ lives shaped her own. The first half of the book deals with flamboyantly named ancestors (Franceway Cossitt?!) battling disease, bears, and endless winters to cling onto their patches of land in Canada and, later, Illinois. The reader gets rather attached to these odd folks and their struggles, and one can sense Johnson’s warm regard for them as well. To the extent that a collection of anecdotes can be said to comprise a history, she handily refutes her friend’s diss.

The second half of the book is Johnson’s memoir of her own life. I suppose I was expecting her to continue the historiographic mood and dwell on the role of family and homeplace in her own development, maybe even carrying it on to her children and musing about her place in the continuing generations. But her telling of her own story is much more straightforward, without the ties to larger historical themes. Though her experiences as a Sixties divorcee in London and a jet-setting Hollywood screenwriter are interesting in themselves, her remembrances feel detached from the stated purpose of the memoir.

I have found a similar problem in some (third-person) history books: as the action moves closer to the present, it gets a little out of focus. Maybe that’s why the old rule was that history is what happened 50 or more years ago. And maybe that’s why this generational memoir doesn’t quite work. I love the concept, I love the family history, and I at least like the personal memoir. But the first and second halves of the book should get–how do I say?–Le Divorce.