Home » Reviews » First Grave on the Right by Darynda Jones 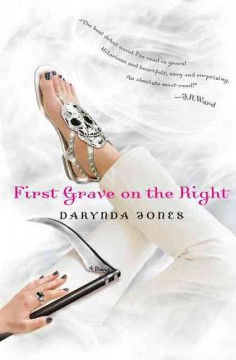 Charley Davidson is a part-time private investigator and a full time Grim Reaper. The first book of the on-going supernatural series follows her as she tries to do her job and convince the dead to “go into the light,” only sometimes they have some unfinished business they need her help with first, usually having to do with how they died. I like this series because it makes you laugh, leaves you questioning what you know about the characters, it is a fun and interesting twist on the grim reaper persona, and has a supernatural romance thrown in to top it all off. Plus it is light enough that you could binge read the whole set. It would be a great series for anyone who enjoyed the Sookie Stackhouse series by Charlaine Harris, or Janet Evanovich’s Stephanie Plum.