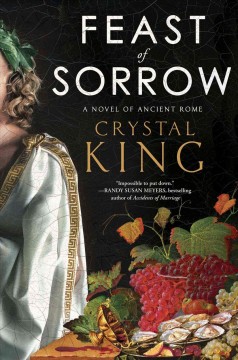 I read a lot of foodie fiction. (And food memoirs, and cookbooks… I guess I just like the combination of snacks and books.) But Feast of Sorrow is not quite like any other foodie novel I’ve ever read.

That’s because most foodie fiction involves foods I’ve at least heard of. But Feast of Sorrow is set in the first decades of the Roman Empire, and boy did they eat some strange stuff back then. Pheasant meatballs, milk-fed snails, and and sausage-stuffed dormice are some of the delicacies mentioned. Silphium (something like fennel), garum (fish sauce), and lovage (??) are major players in the flavorings arena. I found this novel interesting simply for the introduction to the exotic flavors of ancient Roman cuisine. The author has clearly done her research, which I appreciate in a historical novel.

She has also managed to craft an absorbing plot and engaging characters. The protagonist is a fictional chef named Thrasius, whom the author presents as the talent behind the cookbooks attributed to Marcus Gavius Apicius (a real person). The relationship between Thrasius and Apicius is wonderfully complex, and would be a good story by itself. But the author weaves this narrative into real-life events during the reign of Augustus, plunging the reader into the cutthroat competition among members of the Roman upper class for power and position.

There is no happy ending to Feast of Sorrow, but it has fascinating historical details and plot twists to spare. Make room for it on your reading menu!