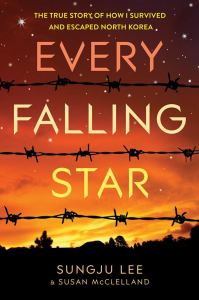 Every Falling Star is the memoir of a young man, Sungju Lee, living in Pyongyang, North Korea while Kim Il-sung is in power. He lives with his mother and father, going to school, playing battle games with his father, and leading a happy life. One day Lee’s world is changed forever after the death of Kim Il-sung. He returns home to find his family packing all their belongs and is told that they are leaving Pyongyang to “take a holiday.” They move out to rural North Korea, Gyeong-Seong, where Lee begins to realize that North Korea is not the paradise he has always believed it to be. Instead he finds himself abandoned, facing starvation, and witnessing public executions. Lee bands with a group of boys and struggles to survive on the streets for over five years.

With North Korea constantly being in the news it can be hard to imagine the lives of those who live within its borders, beyond what we see on television. Sungju Lee’s story and struggles brings a sense of humanity to North Korean people, one that is too often missing in the news cycles. Every Falling Star is a story of lost childhood, resiliency, and hope. Readers will quickly be drawn into Lee’s story and left wanting more on North Korea and what is happening today.