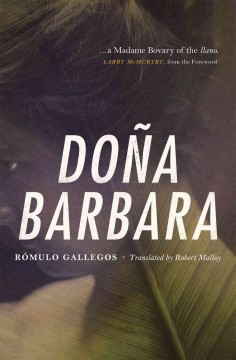 When the PBS list of 100 top books came out earlier this year, I got a copy and started checking off the ones I had read. Turns out, I’ve got some work to do: I had only read 41 of them. But I had at least heard of 99 of them. The only one that was completely new to me was Dona Barbara, by Romulo Gallegos.

So, naturally, I located a copy. As it turns out, Dona Barbara was published in 1929 and is considered a classic of Venezuelan literature. After reading, I can see why: this novel has great characters, a powerful setting, a compelling plot, and symbolic meaning that reaches across time and place.

The setting is the Venezuelan llanos (plains), where two neighboring ranches have been run by feuding families for decades. Santos Luzardo, university educated in Caracas, is the last scion of the Luzardo family, come home to the Altamira ranch to tidy up loose ends before selling off his patrimony. The neighboring El Miedo ranch is now run by the infamous Dona Barbara, a mysterious woman who seduced its owner Lorenzo Barquero. Despite his plans to leave ranch life behind, Santos is drawn into Dona Barbara’s web, and the two begin a dangerous dance of violence and reprisals.

While the story is twisty enough to keep the reader turning the pages, the meaning beyond the narrative is what I really enjoyed. Santos Luzardo represents the modernizing element in South America in the early 20th century: men and women who were urban, educated, and looking to raise their homelands above the strongman ethos that had governed them since colonial times. Dona Barbara represents the old ways: a world in which might makes right, and the only laws are the superstitions that ruled the benighted Indians. (I’m not nuts about Gallegos’s opinions about the native people, but the book is a product of its time and I’m willing to suspend judgement.) The other characters stand in to represent other elements in society. I am particularly fond of Antonio Sandoval, the loyal peon-cum-overseer at Altamira, who moderates Luzardo’s efforts to “rationalize” the ranch by quietly continuing to do things the old way when the old way is best.

So the conflict between Luzardo and Dona Barbara becomes a battle for the soul of the plains: will the rational, modern ways triumph over the violence and sensuality of the past? The outcome is both a very good story and a perceptive dissection of the growing pains of a postcolonial society.