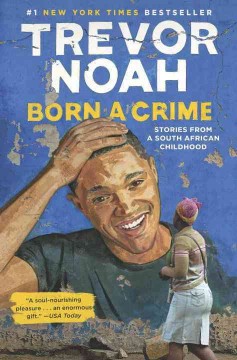 Trevor Noah is the South African funnyman who replaced Jon Stewart as the host of TV’s The Daily Show. So I was expecting this memoir, subtitled “Stories from a South African Childhood” to be full of chuckles. Well, it wasn’t. Maybe that’s because, according to Noah, growing up as a mixed-race child in apartheid-era South Africa was lonely and occasionally dangerous. Most of the stories center around Noah’s attempts to fit in in a society that had no place for him. The other main characters are his strong (if somewhat unbalanced) mother, and his terrifyingly drunken stepfather. Not exactly the makings of a barrel of laughs. In fact, I had a hard time figuring out how Noah parlayed all this trauma into a very successful career as a comedian. He ends the memoir before even hinting at how he got from a street corner in a black ghetto in Johannesburg to primetime American TV. Read this book if you are interested in learning more about South Africa, but don’t expect much in the way of funnies or answers.