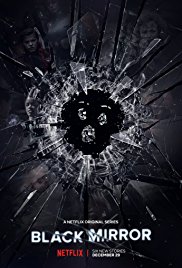 Considered by many to be the modern day representation of “The Twilight Zone”, “Black Mirror” is an anthology series taking place in the all too near future with technology and the effects it has on our lives being the only constant element through out the series. To say the series can be dark and unsettling is an understatement, every episode is packed with twists and turns that constantly raise the stakes for the characters and push them to the edge of of their sanity. Part of the stain power of the series lays within it’s anthology format, we are only given one hour to learn and grow with each episodes characters and it is only in that hour that they get to exist. We are never given the opportunity to see what has or will become of them after the credits roll, so whatever is presented as their ending is truly their definitive end. Not many television programs have the guts to get the audience invested into richly envisioned characters and worlds only to never visit them again. It’s bold to say the least. The show also benefits from a lush production design that presents a world with eerily accurate modern technology that could easily exist in our world within the next ten years (something the creators of the show have strived for since the show’s inception). The show is almost the “anti binge watch” show, as it challenges you at the end of each emotionally taxing episode to build up your emotional walls once more to brace for a brand new journey, only to have them ripped down again by the time the screen fades to black within an hour ,as another story, another world, for better but more often for worse, comes to an end.

*Currently this show is only available on Netflix, so if you have a Netflix subscription, try it*