Home » Reviews » Be Frank With Me by Julia Claiborne Johnson 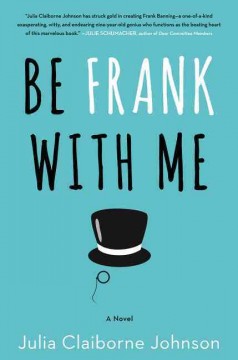 I’m going to be frank with you: I loved Be Frank With Me. This debut novel is engaging, unexpected, and touchingly sweet without ever crossing the line into saccharine.

The gist of the story is this: young editorial peon Alice is dispatched from her New York publishing house to be the personal assistant to famous reclusive author M.M. Banning. When she arrives at Banning’s L.A. mansion, she discovers that “personal assistant” actually means nanny to the author’s eccentric nine-year-old son, Frank.

Frank is the heart of this book, and the reason it is so good. He is a genius who can rattle off facts about almost any topic under the sun, but has trouble relating to other people. (The author never describes Frank as having an autism-spectrum disorder, but that is the way I understood him.) He also chooses to dress in fancy, old-fashioned clothes–he is the only nine-year-old in the world who prefers zoot suits to t-shirts. I think I enjoyed Frank so much because I was once a version of him: a self-contained, precocious child who lived very much in the world of my own mind. I cherish the Franks who come to my desk at the library and tell me all about their interests in dinosaurs, or Civil War battlefields, or (Frank’s particular pet topic) old movies. As another character in the book pointed out, kids like Frank are the ones who as adults will become the world’s great thinkers, inventors, leaders.

It takes time for Frank and Alice to adapt to one another, but once they do they are fast friends. Watching the two of them navigate this rich relationship that neither of them wanted is one of the joys of the novel, and their hilarious adventures around Los Angeles had me giggling as I turned the pages. But when a tragedy strikes the Banning family, Alice is the one left in charge of keeping things together and taking care of Frank. I would spoil the ending if I told you the eventual outcome of Alice’s sojourn as assistant-cum-nanny, but it is both satisfying and appropriate. When I finished Be Frank With Me, I had plenty of warm fuzzies.

One thought on “Be Frank With Me by Julia Claiborne Johnson”