Home » Reviews » An Astronaut’s Guide to Life on Earth: What Going to Space Taught Me About Ingenuity, Determination, and Being Prepared for Anything by Col. Chris Hadfield 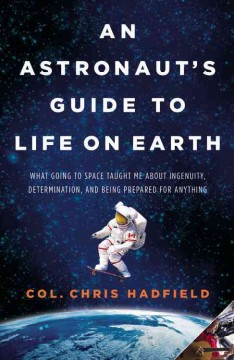 “What an amazing and captivating real life astronaut story! The reader learns not only of Col Hadfield’s life leading up to his astronaut stint but years of fascinating experience before actually being chosen for take-off — testing, challenges, family. We learn and become part of his commanding of the International Space Station (ISS). “Looking out on the second day of our mission, I became aware that in the far distance, there was a distinctive-looking star. It stood out because, while all the other stars stayed the same this one got bigger as we got closer to it. At some point it stopped being a point of light and started becoming something three dimensional, morphing into a strange bug-like thing with all kinds of appendages; it started to look like a small town which is in fact what it is: an outpost that humans have built, far from Earth. The ISS. It’s every science fiction book come true, every little kid’s dream come true, a large capable, fully human creation orbiting up in the universe.The ISS is a one million pound spaceship that’s the size of a football field, including end zones, and boasts a full acre of solar panels.”

We may have minimized the importance of space missions. Did you know data gathered on the shuttle and ISS help power Google Maps? Experiments with different dietary and exercise protocols have revealed how to ward off osteoporosis. This book will restore your fascination with trips to outer space. Interjected among the fascinating bits of experience and information is the intrinsic value of the steps of becoming qualified for flight and landing on the moon. Nothing is taken for granted. One learns to sweat the small stuff and how important you are in a team minus the ego and need for recognition. Ability, achievement, responsibility – never assume, and be ready for anything. Hadfield describes the landing of the shuttle like a baby’s birth –”this sudden sensory overload of noise, color, smells and gravity after months of quietly floating, encased in relative calm and isolation. No wonder babies cry in protest when they’re born.”Hadfield, a musician, managed to record music in space and his son developed the YouTube video “Space Oddity”- a take on David Bowie’s 1969 tune. Google “youtube space oddity hadfield” and view an amazing recording in space. It’s a must after reading the book. Ah, icing on the cake!