Home » Reviews » A Gentleman in Moscow by Amor Towles 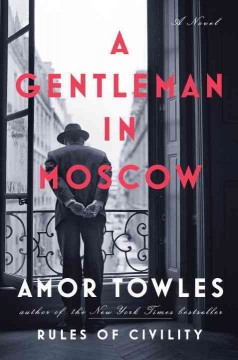 A few years ago, Amor Towles’s debut novel, Rules of Civility, was a bestseller. I read it, but I truly can’t remember a darn thing about it. In my opinion, Rules of Civility was (literally) forgettable. But I doubt I will ever forget the author’s sophomore effort, A Gentleman in Moscow.

This book is a reader’s delight. The protagonist, Count Alexander Rostov, is sentenced by a Bolshevik tribunal to house arrest in Moscow’s Hotel Metropol in 1922. The novel then follows Rostov through the next thirty-odd years. The Count is an excellent character–perhaps not entirely realistic, but his combination of stoicism, erudition, and wit make him a perfect understated hero. I rejoiced to learn that Kenneth Branagh will be portraying him in the forthcoming movie, because that is who I pictured as the Count (albeit in Branagh’s younger days). The cast of supporting characters sparkles with a precocious young girl, a glamorous actress, a temperamental chef, and an evil Party apparatchik. The dialogue, while occasionally a tad stilted, provides plenty of humor as well as hidden delights for a reader familiar with European history and culture.

The plot trips along pleasantly, leaping over swathes of the 1930s and 1940s–World War II is remarkably absent–to keep the story moving. (I am grateful that the author is not himself Russian, as the Russians tend to get a little long-winded.) A few plot twists caught me entirely unawares, but the happy ending was in view from quite a way off. Towles does channel the Russian quirk of inserting philosophical musings into the narrative, which some readers may find pedantic and a bit annoying. But I enjoyed joining the Count as he considered the contributions of the Russians to European culture, and whether Russia always destroys its own masterpieces. These would also be excellent talking points for a book club.

A Gentleman in Moscow is deservedly one of the most popular novels of the past few years.