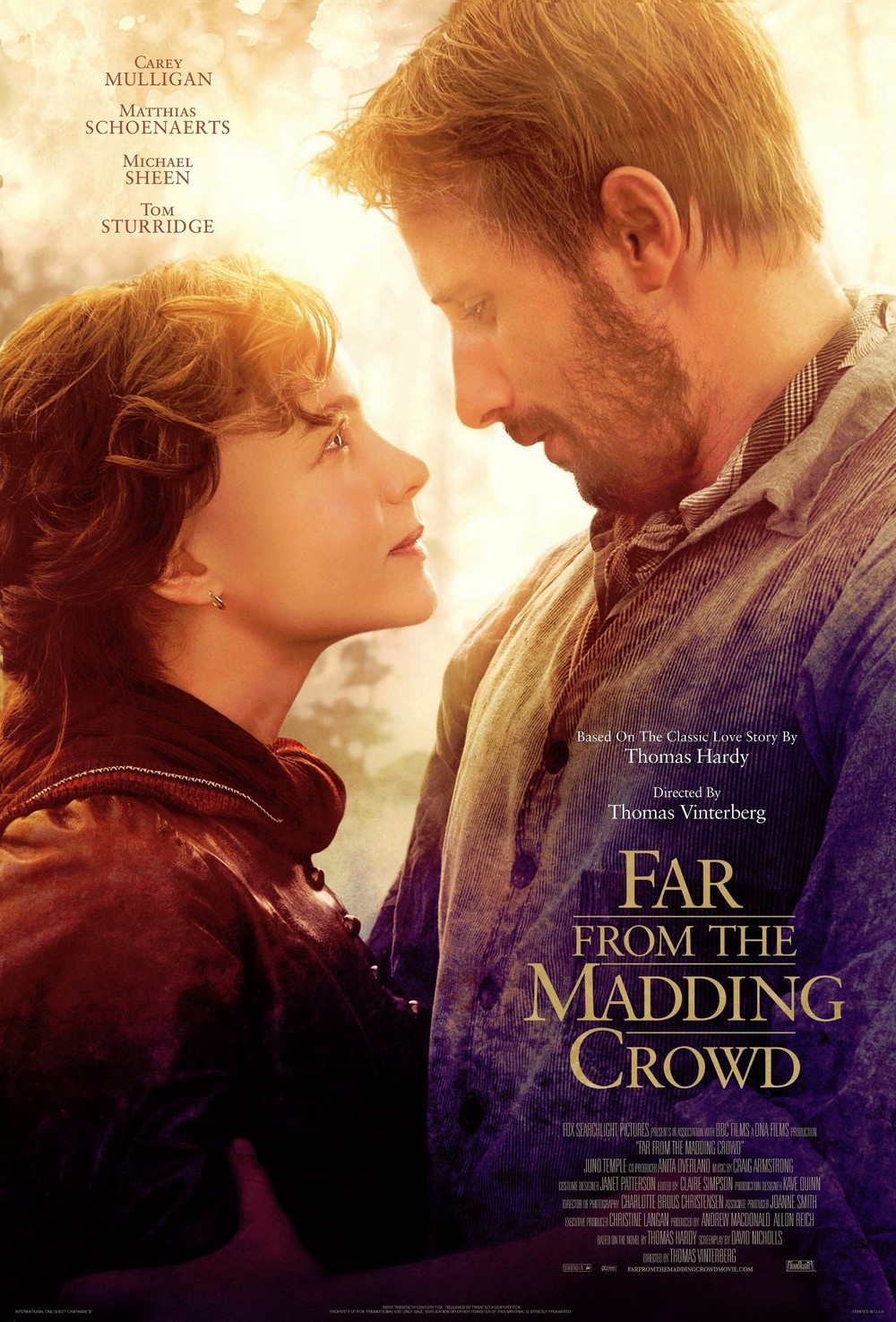 Thomas Hardy novels are an acquired taste that most people never acquire. His books were considered by many critics to be scandalous when they were published, but they seem pretty tame to a modern audience raised on The Girl With the Dragon Tattoo. The new movie adaptation of one of his most famous novels, Far From the Madding Crowd, does justice to the original 1874 work while delivering a lovely drama for a 2015 audience.

The plot is deceptively simple: a beautiful and headstrong young woman, Bathsheba Everdene (Carey Mulligan), has to choose among three very different suitors. Farmer Boldwood (Michael Sheen) is older, kind and prosperous; Sergeant Troy (some actor I’ve never heard of) is a dashing bad-boy soldier; and Gabriel Oak (some other actor I’ve never heard of) is the boy next door. There are enough plot twists to satisfy any Downton Abbey fan, and I found myself rooting for each suitor at different points in the story. The resolution to Bathsheba’s troubles doesn’t come about until the absolute last minute of the movie, so make sure you have plenty of popcorn and tissues on hand. 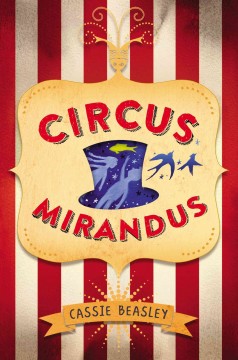 I felt like this mesmerizing magical tale actually delivered what so many other books only promise to do. Micah has grown up on his grandfather’s stories of childhood encounters with the magical Circus Mirandus. Now that Grandpa Ephraim is gravely ill, Micah decides that finding the enchanted circus is the only way to save his grandfather. I loved how threads of Grandpa Ephraim’s history were woven in and brought depth to Micah’s experiences. I highly recommend this wonderfully rich story to older children, teens and adults. It would be a great family read-aloud or audio for a car trip. 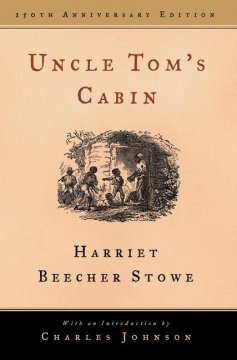 A classic American book that changed the world, but have YOU read it? Written in 1852 as an anti-slavery tool, the story helped change public opinion in the United States. What exactly does it mean to be an “Uncle Tom?” Was the character Uncle Tom merely a “yes man” or was he one of the first black heroes of literature? Read it yourself and see.

This original film chronicles the life of a boy played by an actor who is filmed throughout his life. The fact that the actor grows up and the fictitious boy grows up together makes the film extremely realistic. The plot is authentic in portraying American family life. 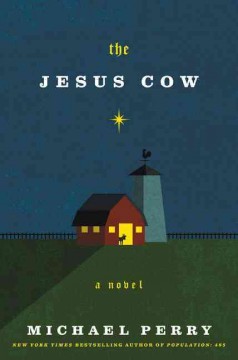 The story takes place in Swivel, Wisconsin and features Harley Jackson, a man trying to save the family farm. What changes everything, in funny and eventful ways, is a calf being born with the image of Jesus on its side. Perry weaves the small Wisconsin farm town antics with the hilarious events that take place when something goes viral. Relationships, faith, money, carving out a living in a rural town- you name it! This book satisfies. 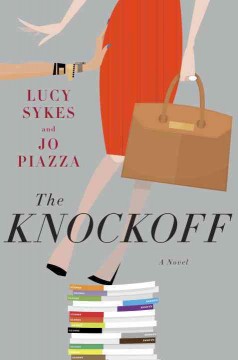 I found this book impossible to put down! 40-something Imogen, editor of Glossy magazine, returns to work after a 6 month recovery from cancer & finds 20-something sociopath Eve has taken over her job and reduced the magazine to an app. This funny and thoughtful book looks at how social media is taking over the world, not always for the better. 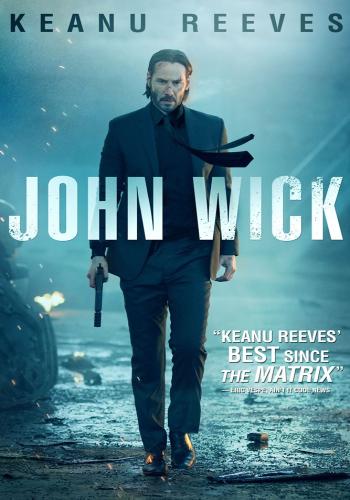 What makes John Wick a great way to spend an hour and forty-one minutes is that it takes the revenge against villains action stereotypes and stands them on their head. Yes, a lot of bullets fly but they do so with a cinematic flair that aficionados will appreciate and find a breath of fresh air.

Keanu Reeves puts his heart and muscles into every imaginative fight scene, all of which are handled so that they are not just used in place of a commercial break. The dialog is top notch, full of speaking looks that convey so much of the story as tends to happen in conversations with longtime coworkers and associates.

Two things about this movie assured its place in my personal library. First, lines like, John Wick completed an “an impossible quest” the kind of quest the bogey man wouldn’t have survived, for a while he was the man we sent to kill the bogey man. Second, the ending was so perfectly touching and unexpected that I spent the next day talking it up to my coworkers. 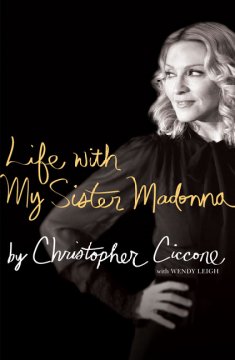 If you like to read about famous people and their inside personal lives, then this is the book for you. Christopher examines his life as he grew up with Madonna, and later became her dresser and event director. It’s kind of like not being able to turn away from a car wreck; these people become more strange and spoiled (and unhappy) the more rich and famous they become. 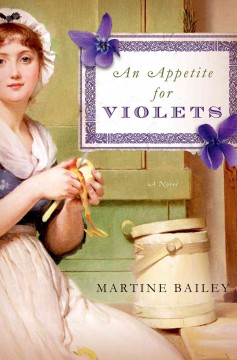 Reviewed by Judy B. (Library Staff)

If you enjoy Downton Abbey, you’ll enjoy this fun romp through the upper & lower classes in the early 1770’s. Biddy Leigh, an under cook at Mawton Hall, finds her culinary world over turned as the new mistress of the hall drags her and several other servants to a villa in Italy, with many culinary stops in between. I enjoyed the 1600 & 1700 recipes that introduce each section of Biddy’s diary. 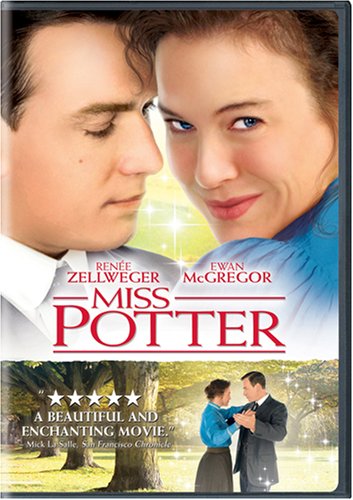 If you have been disappointed lately with some of the Hollywood releases, you’ll be pleasantly surprised with this 2007 film about the life of Beatrix Potter, the author of “The Tale Of Peter Rabbit.” This movie is well written, acted, and directed, with beautiful cinematography. Plus, its rated PG. Yeah! A good, old-fashioned English period romance about an extraordinary women. Highly recommended.